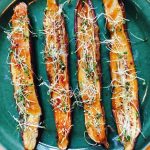 I love the delicious simplicity of this recipe. Miso Glazed Japanese Eggplant shines as an entree, or a side, and the addition of miso adds cancer fighting benefits as well as umami, making this my go-to recipe for eggplant.
Course Entree, Side Dish, Vegetables
Keyword coconut sugar, eggplant, miso, rice vinegar, sake, scallions, sesame, soy
Servings 2 entrees (or 4 sides)

Eggplant is an excellent source of dietary fiber and a very good source of vitamin B1, B6 and potassium. Research on the health benefits of eggplant have focused on a flavonoid in the skin called nasunin, a powerful antioxidant and free-radical scavenger, shown to protect cell membranes from damage. Miso is a good source of many minerals, including zinc, manganese, phosphorous, Iron, and copper. Miso also contains vitamin B2 and B6, as well as protein and dietary fiber.